Development of the locks with the years 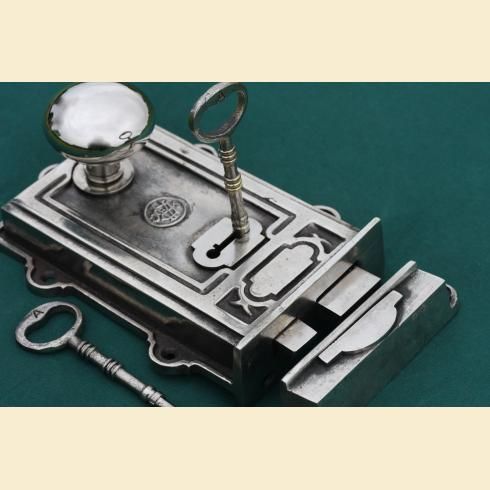 The development of the locks with the years is marvelous and surprising when you begin to see it from the scratch. From key to locks, and now touch pad locks, finger print locks, and now the latest technology named Smart locks, it is quite amazing the way things have developed. Also to know that locks can now be opened using your smartphones, or even by the use of your voice. If you wish to know more about this development, then continue reading as we have some incredibly interesting topics lined up for you.

Basics of what a modern lock is

Modern locks are the types with a Key to a lock, in fact it is used mostly around village type areas else people who still love the touch of the modern manufactures. It is known to a mechanical or electronic fastening device that is released by a physical object.

The earliest known lock and a key device was discovered in the ruins of Nineveh, the capital of ancient Assyria. These locks were later developed into Egyptian wooden pin locks, which consisted of a bolt fixed to the door and a key along with it. As the key is inserted to its fitting hole provided on the bolt that is fixed to the door, the fixture was then lifted out of the drilled holes within the bolt, allowing it to move. When the key is removed, the pins fell part-way into the bolt, preventing it from moving.

Modern locks with the onset of the industrial revolution in the 18th century, locks and keys were manufactured with increased complexity and sophistication. The perfected first known invention was by Robert Barron in 1778, known to be the lever tumbler lock. It required the lever to be lifted to a certain height by having a slot cut in the lever, so lifting the lever too far was as bad as not lifting the lever far enough. This type of lock is still being used.

The lever tumbler lock was greatly improved by Jeremiah Chubb in 1818.  Chubb developed the tumbler lock into a way that could only be accessed with its own key.

Types of locks with physical keys

Uses a set of obstructions, or wards to prevent the lock from opening unless the correct key is inserted. They key includes notches or slots that correspond to the obstructions in the lock, allowing it to rotate freely inside the lock. 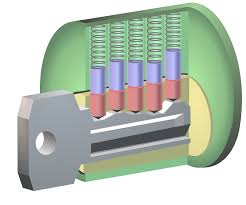 Uses a set of pins to prevent the lock from opening unless the correct key is inserted. They key has a series of grooves on either side of the key’s blade that limit the type of lock the key can slide into. As the key is inserted into the lock, the horizontal groove on the blade align with the wards in the keyway allowing or denying entry into the cylinder. A series of pointed teeth cuts and notches on the blade, called bittings allows the pins to move up and down until they are in line with the shear line of the inner and outer cylinder, allowing the cylinder to lock to open.

Similar to the pin tumbler lock, and works on a similar principle. Unlick the pin lock (where each pin consists of two or more notches) each wafer is a single piece. They wafer tumbler lock is often incorrectly referred to a disc tumbler lock. This lock is inexpensive to produce and is often used in automobiles and cabinetry.

Uses a set of levers to prevent the bolt from moving in the lock. In its simplest form, lifting the tumbler above a certain height will allow the bolt to slide. Lever locks are commonly recessed inside wooden doors or on some older forms of padlocks, which also includes fire brigade padlocks.

Smart locks, known to be the latest of technologies. Which allows one to unlock or lock their houses with a lock that can be accessed via smartphone applications, voice activation, geofencing, blue-tooth or even Wi-Fi. It also comes along with a monitoring unit which allows you to go across activity logs of who has entered or exited your house during your absence. In case you forget to lock your door, you can set a perimeter and use your mobile to point your location, which means, if you are out of the perimeter that is set, then the door is auto locked after a period of time. As you read this article, you can clearly understand how the development has taken place with modern locks in form of levers and wards, until now to the smart locks.

There are several locksmith in Burbank who buy old or used locks. There are several others who sell these types of smart locks or modern locks, and would also help you with repairing them if needed. Including the installation process which sometimes seems complicated or difficult. Smart locks however are known to be quiet expensive, however there are several other smart locks within the range of $100, yet these are not of much quality since the products used for manufacturing is not much quality. Several locksmith’ in Burbank can be found via Internet, or newspapers, or even friends and family. So if you are in need for one, feel free to check within your friends and family first, otherwise you can find contact information of certified locksmith agencies via internet.